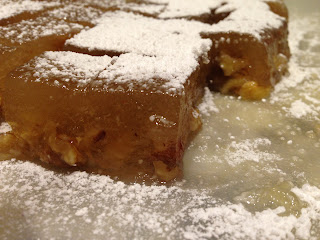 Washington (the state in the Pacific northwest, not the national capital) is known for its apple orchards.  Thus, when one searches for distinctive recipes from the state, many involve apples.  I decided to try a candy known commonly by the name of its original commercial version:  Aplets.   According to the internet, aplets (and an apricot version called cotlets) were developed by two Washington orchard owners of Armenian descent, who were drawing on their memories of Turkish delight.    While the ingredients of the original appear to be vegan, many copycat recipes involve gelatin.   Here's a veganized version for you:

1. Grease an 8 inch square pan and set aside.

2. Peel and chop an apple.  Measure about 1 cup of chopped apple and place it in a saucepan.  Cover with an inch of cold water.  Bring to a boil, cover, and simmer for 30 minutes.   Drain the apples, reserving 5 tablespoons of their cooking liquid.   Place the cooked apples and liquid in a food processor, and process until smooth.

3. Put the apple mixture back in the saucepan, and stir in 2 cups unrefined sugar.  Place back on the heat, and stir until the sugar dissolves and everything begins to bubble.   Pull off the heat.  Whisk 3 (10g) packages of Natural Desserts Unflavored Vegan Jel into 1 cup of water.   Quickly whisk this into the hot apple mixture.  I returned it to the heat for a minute, but I don't think that was necessary.    Stir in 1 t vanilla and 1 c chopped walnuts.  (I think black walnuts would be spectacular, but I didn't have any.)   The recipe I worked from called for rose water (which the other human doesn't like) or lemon juice (possibly too acidic for the vegan jel - the package warns against it), so we went for vanilla.

4. Acting quickly (as the mixture will begin to set up), pour your candy into the prepared pan.   Cover and refrigerate for several hours or overnight.   When completely firm and cold, use an oiled knife to slice it into squares, and toss them in powdered sugar.   Store in the refrigerator.

If you cannot find the Natural Desserts product, you could probably get a similar result with agar or pectin, although some tinkering would be necessary.   In truth, agar might be an improvement.  While these taste great and were easily sliceable into squares, they are a bit softer than I want them to be.  The firmness of agar would likely help them. 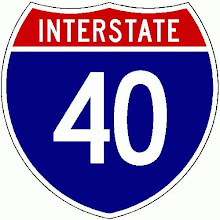